This blog post is one part of the series “learning diary” for a course at my university.

Goal of this report is to take and rate a online learning unit. For the fourth and final learning unit we should take a mobile learning unit. I used the app Learning Japanese (Google Play Store) for my mobile phone. As an experiment we have been asked to create a video for the review: https://youtu.be/LUS9Tu6RVpo

Short synopsis of the unit:

Learning Japanese is a language learning software for the Android platform. It consists of three main components: The Kana learning (Kana being the two basic alphabets of the Japanese language), an expression trainer (Dates, Time and numbers) as well as a vocabulary trainer.

The app focuses on Kana learning, as all other components build on the ability to read Kana. Based on that skill the “daily expression” tab provides lists of numbers, dates and times as well as tests for these sections. Somewhat easy to overlook is a small icon on the top right corner of the numbers section on which you can enter numbers, which get translated to the corresponding sign (including a sound file).

The third section is reserved for the vocabulary list of the Japanese-Language-Proficiency Test (JLPT). This test is similar to TOEFL or IELTS but for the Japanese language. The needed vocabulary for the five level of this test is listed in this app and can be trained and tested.

Reflection on your personal learning experience

All in all, I’m disappointed. I started (and stopped…) to learn Japanese several years ago and hoped this app could maybe reinforce my small knowledge of the language. Even better I hoped it could ignite my desire to finally learn the language again.

Unfortunately, it didn’t ignite anything. The app may be suited to learners of Japanese which had a more recent encounter with the language but it is in my opinion not helpful for beginners or people looking to refresh their knowledge.

My learning experience with this as (again, basically as a beginner) was frustrating. There is no learning concept at all, just different components like the syllables to memorize.

Did you achieve the stated learning goals?

No, I did not achieve the stated learning goal. As stated before my learning experience was not as good as expected. I think I’m not the right target audience for this app. Maybe with a hint at the description page of the app I would have chosen another app.

Did the given time suffice?

There is not statement how long it does take to memorize all Kana or the provided vocabulary and expressions. Taking the 90 minutes in considerations the mobile learning units should take, I would say that the time is not sufficient.

Even if the learner had some training in the past, the 90 minutes aren’t enough to memorize even one of the Kana (not to speak of the vocabulary and the expressions). I managed to remember the first set of Hiragana (the first of the Kana) after roughly four hours of use, with mediocre results on the tests.

Comment on the design - what was good, what could be made better?

Two main points regarding the design are worth mentioning, when discussing this app: Usability and the used learning method.

Starting with the usability I need to add that I’m not a user interface designer or an expert on this topic. Yet, in my opinion the app lacks usability at certain points: 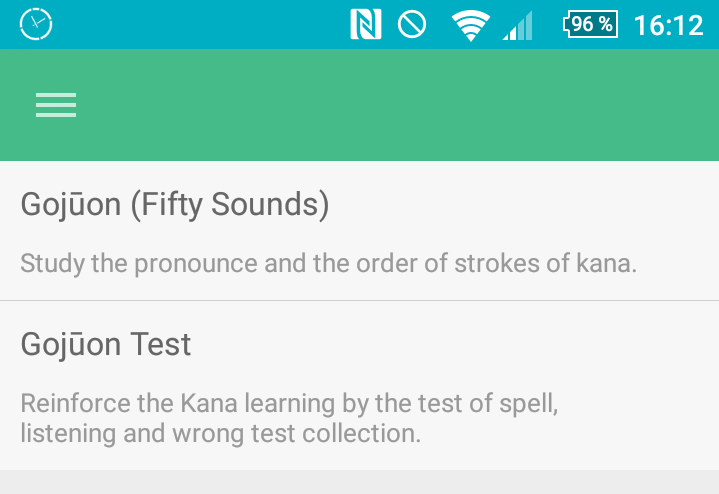 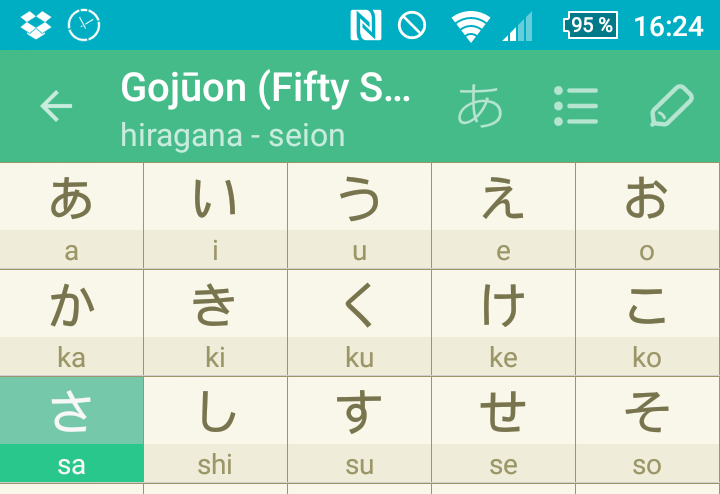 The second (and more important) design issue of these app in my opinion is the used learning method. As I mentioned earlier I had some training in Japanese several years ago. The learning method here in this app is best described as drill: “Look at these 200 foreign characters and remember them”.

The method I learned the Kana with was invented by James W. Heisig (J. W. Heisig/ K. Gresbrand – Die Kana lernen und behalten). It ties every single sign (and the modifiers) to a story which stays memorable longer. Just by looking at the Kana in this app table I remembered some of the stories from that book.

Probably the app can’t incorporate these methods because of intellectual property reasons (which is understandable) but the given learning method for this app wasn’t helpful for me at all. If the designer of the app would have tried to make the learning process a little bit less tedious (stories, small lessons etc.), maybe I would be more positive about the app.

Positive and negative aspects of the contents of the unit

All in all, I would grade this app with a 5 out of 10. Most of the positive and negative points had already been listed in the previous chapter, but I really want to stress the point of the learning method for Kana (see “Comment on the design”). The method used in this app wasn’t helpful at all to learn the Kana (for me). I’m pretty sure one can learn the Kana this way, but it’s harder than necessary.

The app got a bad grade from me. My main reasons for that are due to the fact that I’m not the right target audience. So if someone with more prior knowledge in Japanese rates this app, he could give a better grade. Also, the fact that this app is free should be taken in considerations, as other sources to learn Japanese like books (the mentioned one for example) aren’t free.