Our third day in Barcelona started with Bauernfrühstück. We had some cooked potatoes left and added some eggs, bacon and onions for a delicious meal. After the breakfast we headed for the parc de la ciutadella saw the font de la cascada, an imposant monument with (you would never guess) some cascading wells. 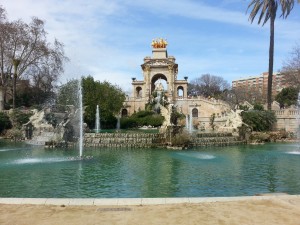 The park is nice, mostly populated by joggers, school classes and mammoths. The three buildings which were marked in our map were all unsatisfying. The Castell dels tres dragons (a museum) was closed and had a site fence surrounding the building because of falling debris. Also the hivernacle as well as the umbracle building were closed and a little bit untended. The university building of the Universitat Pompeu Fabra on the other hand was very nice. I have to admit that I don’t know so many other old university buildings (the campus of my university was build ~ 10 years ago) but the UPF has a nice mix between modern and traditional, old buildings. Tip (blatantly stolen from our guide): Go into the university main entrance and go into the library. Follow the instructions to the dipòsit de les aigües. It looks really nice.

We had a quiet good (and for Barcelona cheap) meal at the university canteen (noodles with tomato sauce).

After the lunch we went to the beach. Unfortunatly the weather got worse (wind, no sun, wind and around 12° Celsius) and I could not swim in the mediterian sea. I have to catch up on that later. We walked the beach promenade and saw some of the tourist spots (like this copper fish) 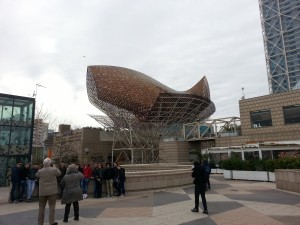 The rest of our tour we underwent in the district of Barceloneta, where we tried to find stuff mentioned in our guide. But after ~5 hours of walking we were tired and headed home. We then had a real nice Rioja from 2005 with our salad.