Tl;dr: YNAB4 is awesome and you should give it a try. I managed my finances!

How the time flies by! A year ago I installed You Need A Budget 4  as trial on my system. Since then I used the software (or the Android version) everyday. After the trial period I asked the ynab.com for the free student version of their software. After the license key arrived everything worked fine. No need to import/export data between trial and full product.

So, what can I say after using YNAB4 for around a year?

Accounts - A lot of them

I set up around ten different accounts in YNAB. Despite the fact that it sound as if I am a finance broker or something this seems like the ideal number of accounts for me:

“Lent Money” - How to handle money which isn’t here

I lent a lot (read: often, not high sums) money to friends or my girlfriend, disburse the groceries purchase or, the other way around, someone pays for me because I left my wallet in the office. Because I tended to forget whom to pay what (and who to remind for some Euros) I set up the “lent money” account. When ever I lend money, I make a YNAB transfer to that account. This way I have  the same amount of money in total, but literary spoken in another mans pocket. The same goes for a splited meal with my girlfriend (split categories are great for that). If we pay thirty Euros I set the category to split. The one half goes to my Food category, the other half to the “lent money” account. Kind of special is my girlfriend, who has her own “lent money girlfriend” account. This way we can balance our lent money.

One thing I learned: Reconcile the account often. Especialy the cash account (because you don’t have a balance/register like with credit cards). Personaly I try to reconcile every week, and even that is sometimes not enough.

Usefull not only for the rent but for every reoccuring payment with fixed sum. Bonus for using the “Total scheduled outflows this month”-feature in the budget view.

A feature I have not used once are flags. I honestly have no idea how to put them to good use. Maybe I miss a major feature, but right now I removed the column. 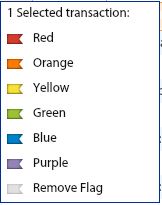 Regarding the budget view I can just say that I do like it very granular. I have fourteen main categories, each with its according sub categories. I use the note feature a lot, for the budget categories as well as the “budget category per month” column.

From the provided autofill features I use only “Amount budgeted last month” and “Average outflows for last 3 months” regulary. The calculator is unfortunatly only ok: If I use keyboard only it’s clever enough to pop up when I start to type an equotation (“7 * 7”) but does not recognize the multiply sign at the calculator itself. Instead it sums everything up.