Summary: My Dell XPS 13 9360 laptop has issues with the touchpad. The Dell support site is the pure horror but the Dell support team via Facebook is fast and helpful.

Long story: Several days ago the trackpad stopped working. It started when I connected a Apple Magic Mouse for more convenient playing. When I disconnected the mouse, I realized that the trackpad stopped working. Thinking the laptop just swallowed up I restarted the system. And sure enough, the trackpad worked again… for some hours. After that I just stopped working again. Sometimes it repeaired it self to the point that I could use it, but no multi touch gestures (pinch, scroll etc) would work. I had a look in the Hardware-Manager of Windows and saw a yellow exclamation mark next to a I2C HID-Device. The error message states “A request for the HID descriptor failed”, what ever that means. 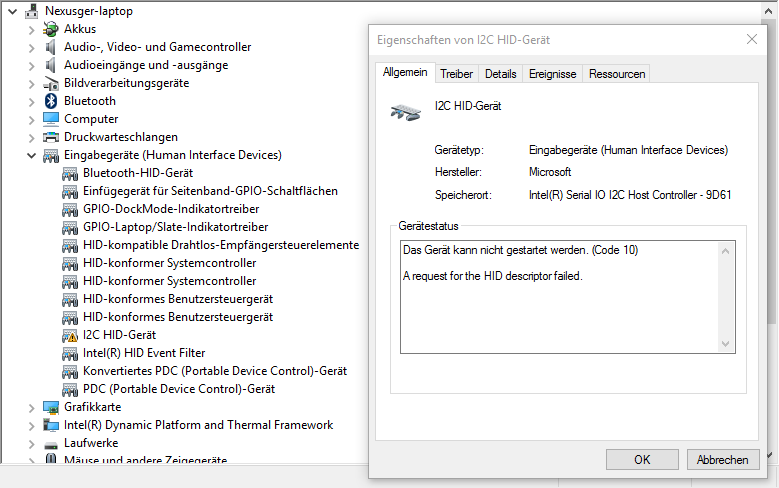 Unfortunatelly there is no solution known to me. In the Dell forum two threads (one, two) describe my problem yet nothing seem to solve their issue. I’ll see the Dell support for this :-/

After reinstalling Windows 10 and installing all drivers from the Dell website for my laptop the issue still persists. Therefore I rule out wrong configuration and wrongly installed drivers.

I tried to make sense of the Dell Support site, but am utterly displeased. You are always forced to download Dell System Detect, regardless if it is already downloaded and installed. Chat Support is not available, Mail Support redirects to the same page again and I try to avoid telephone support because of the international calling fees (I’m in Australia atm). I asked the Dell Facebook team when the chat is avialable… Stay tuned.

Related but not Dells fault: Obviously the disk I made my backup on, starts to fault… As if a broken laptop isn’t enough…

After reaching out to Dell via Facebook a service member reached out to me. Four hours after my message to the Facebook page I had a service call, a remote session and reference number for replacement. As I had booked a flight to Japan the support asked me to get in touch with Dell Japan as soon as I arrived.

In Japan I had some problems with the support (for a on-site replacement I need to be able to speak Japanese) and I was not keen to hand in my laptop while I’m travelling… So I decided to roll with the punches and use an external mouse for the rest of the holiday. I’ll start the support process again as soon as I’m back in Germany